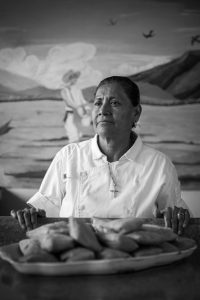 11a. Tireless Warrior, On The Side of the Brave I

<<So that’s where suddenly I started to feel bad, really bad. I was sweating really badly and I had a fever. They held me there for a night [in the hospital]. And the next they ran tests on me, and my private parts… because of all the mud I absorbed… it entered into my vagina. All that mud from the river. They got rid of the infection, and I couldn’t even pee. It hurt horribly. Thank god, it passed and I survived.>>

<<Work is the best therapy for any problem. That’s why I have dedicated myself to that business in body and soul. Therefore, my message, for all those people that live in Tijuana now, who’ve experienced the misery of being deported, is that life isn’t over. And that the streets and bars are not the right places. We don’t deserve that because we are human beings, we deserve to live with dignity. Also, that they don’t have to go to the US to be successful. I because successful in my own country, here in Tijuana.>>

<<Deportation totally changed my life and here I am, I survived and turned the impossible into the possible. Life’s ironies: my American dream became my beautiful Mexican dream. I grew tired of crying, I don’t want to cry anymore. I want to be one of the success stories, an example. And show that it’s possible, that all is not lost.>>

11a. Tireless Warrior I