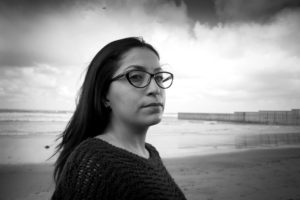 115a. Dreaming in the Shadows

“Unfortunately, that order of deportation came to sentence and I thank God a year before that in 2009 I took her father to court because we weren’t getting anything clear so I said that I wanted him to be responsible for his child. I don’t think that he ever knew that I was undocumented, pretty much like a fgitive, hiding from immigraiton – because I never told him, I was never specific to anyone about my status. I think that a lot of people still don’t even know my situation. Ust the fact of your parents telling you << es mejor que no les digas nada porque algo siempre nos puede pasar>>. Because their case was difficult, having two American kids and two Mexican daughters, so I understood that they’d separate us.”

115b. Feelings Are Feelings and Family is Family

“In less than an hour I was in Tijuana, Baja California where I’d never been; I had no idea where I was gonna be…  When I was in Tijuana where I got dropped off, cuz you get thrown like if you’re nothing… Because in the time that I got detained from the LAPD my sister and my mom went to pick up my daughter. That’s just a memory that I am not gonna take away: my daughter seeing me being taken out and that was the last time I saw her too.”

115a. Dreaming in the Shadows

115b. Feelings Are Feelings and Family is Family