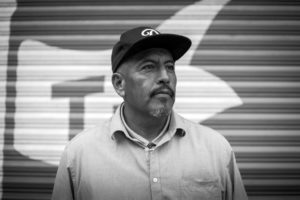 “In 2014 I was deported and ended up in Tijuana. Prior to that I was deported twice and I went back home just by saying that I was a U.S. citizen. The reason I was deported was because my green card was taken away for an incident that happened in 1991… In the court my lawyer asked me if I wanted to take a plea bargain that they were offering me that sounded really good and I wouldn’t do any time served. All I have to do is plead guilty and I would be okay. O plead guilty and I was set free. In 1996 an anti terrorism law passed in which made any crime commited by a non citizen would be considered a terrorist. There I am, considered a terrorist.”

“I learned a lot and found out that the court made a mistake on my paperwork… I filed paperwork, tried to reopen my case. While I was fighting my case I was thrown into confinement and was denied privileges to a computer or legal library… I was denied any writing material… I was able to get out on bail after filing severa papers. It is something that everybody wanted at the time in Theo Lacy, Orange County facility.”

“I was working for King Pen promotions, I was doing good at the beginning but I was going through my depression and not having a place to stay I wasn’t able to shower like any other person and wash clothes and whatever. I showed up kinda dirty, I hadn’t slept, and I wasn’t doing good. So they had to let me go and I understand… I guess this is a message for everybody you know. Not to quit and fall into drugs. There’s always hope.”

“Towards the end I was practically the last one that remained in the hunger strike and they asked me <<you are the last one, what does it take for you to stop this hunger strike? And I said, I just want to be placed in a facility where I am able to touch my family, hugh them and kiss them goodbye you know. And more important, to just have access to a law library… When people saw me coming out of the modules out into the barracks they were like <<how did you do that?>> and I told them that I had to go through a hunger strike.”