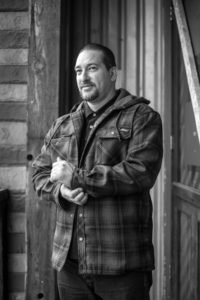 “My name is Daniel Ruiz, I have been in Mexico for about 17 years. I was taken as a baby to the United States, I was there until 22 years old. I was raised in the United States. I felt like an American citizen. I grew up on American TV, American culture and never thought in my head that I was not an American citizen. And then got deported for marihuana charges. I was okay with my deportation. I knew I had broken the law and now I am here in Mexico. I got here, I had to learn the culture, I had to learn basically everything about Mexico, and that was very difficult. It took me a while to adapt… We are trying to create a voice also for deported people… to create a unity and voice in society, we are not criminals, because here in Mexico there is a lot of racism, if you are deported they think you are a criminal. We want to make sure we show people that we are good people, we are just trying to make out lives here and do good.”