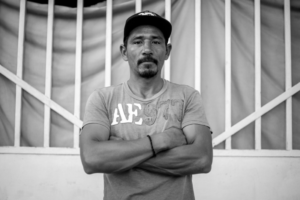 37a. Thanks to the Deportees, Another Chance: Child of the Street; Addiction; Overcoming

“I recall how the authorities would arrive at night when we were asleep, how they didn’t have any respect, they’d burn our homes, our lean-tos that we called “ñongos,” how they were abusive—they didn’t want us there. They did all this to kick us out, get us out by force. Those that they’d catch would be detained for no reason. I honestly didn’t pay any attention to them because my motto was that this was no man’s land, and no one could kick me out of there.”

37b. Thanks to the Deportees, Another Chance Part 2: Addiction

“I want to let you know about my life during a second period in the canal. Around 26 or 27, I fell into another addiction, this time to heroin mixed with crystal, so it was very difficult for me to leave the canal again. I lived there for several years and I want to tell you about what I saw during that time. On the one hand, I had my shack, I lived alone. I had my shack beside the Mexico bridge just below and to the side of the first sewage drain. I remember it was really easy to get drugs thee, everybody had some and would sell to you.”

37c. Thanks to the Deportees, Another Chance Part 3: Overcoming

“I was taken to this house of life, this rehabilitation center, Amanecer (“Dawn”) where I’ve been given a new opportunity to live as a person, without alcohol, without drugs and now I’ve been with them for 1 year and 4 months. A place where they’ve truly taught me to appreciate many things that I, while maybe blinded by drugs had to live. But thanks to this home, and thanks as well to the operatives, because if it hadn’t been for the deportees, I don’t think I’d have saved my life since it was because of them that there were so many operatives because there was such an overpopulation in the canal”

37a. Thanks to the Deportees, Another Chance Part I: Child of the Street