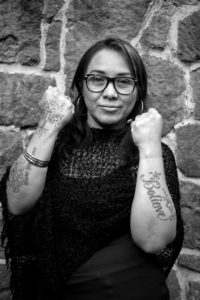 “I’m Ana Laura López. I am 42 years old. I went to the United States at 24. I settled in the city of Chicago. I left because of the economic problems that existed in my country. In Chicago, I started a new life. I worked for several years in a store. I finished high school there, English and Computer Science. I formed a family. I had two children, Angel and Daniel. My life was normal until September 30th, 2016. Despite having lived almost sixteen years in the United States and being an honorable person, it was never possible for me to fix my immigration status. In an attempt to solve this situation, I can’t return to the United States for 20 years.”