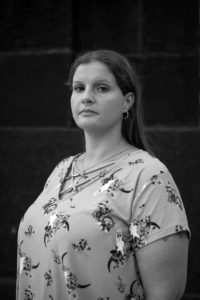 66a. Deportation the Effects on the Soul Part I: Dwelling in the Past

“One day out of the blue my husband gets up to go to work, steps outside the front door and sees ICE there, looking for somebody else who gave my address and said that they lived there. ICE was looking for this person and I told them that I lived here for five years. The next thing you know they are calling him in because he had a criminal background from ten years prior. But because he already did his time ten years ago, he had a criminal record, they took him, in front of my son… So I picked everything up, I sold everything I had within a month, including one of my cars, packed everything into a truck and took my two kids… I made the decision to take my kids to Mexico and be with my husband. And I had him sign his papers for voluntary deportation so at least in the future he may have an opportunity to go back, maybe.”

66b. Deportation the Effects on the Soul Part II: Leaving the Past Behind

“Like I saw my husband has struggled more, not being able to find a good paying job. He never got the chance to finish his secundaria and he didn’t have his military either because he went over there right after he turned 18. So its harder for him to find a job here in México than it is for me. He gets depressed a lot because he wants to work. That’s my story and hopefully it helps people out there to understand that it might not be the high life and the easy life like you had in the U.S. but you can do it. It’s not gonna be all easy and all that, but it wasn’t when you went over to the U.S. either. It’s just a different way of starting over.”

66a. Deportation the Effects on the Soul Part I: Dwelling in the Past

66b. Deportation the Effects on the Soul Part II: Leaving the Past Behind